Being an eager beaver and a project manager has its upsides and its downsides. Yes I had booked so far in advance that I saved 35% on the hotel…it also meant that I had booked the hotel with a boyfriend who was no longer my boyfriend by the time September came around.

I wasn’t about to miss an opportunity to dress up and drink beer so I boarded the plane with my former flame and went anyway, in spite of the forecast for potential awkwardness. I had dragged along a girlfriend to act as an awkwardness diffuser and inadvertently created a tripod of epic beer drinking capabilities.

It’s all about the beer

We went for the final weekend which coincided with German Reunification Day this year. When this happens they extend the festival so that it ends on the holiday and everyone can go out with their friends and family to enjoy it. Many people go home before the final day as it’s usually a weekday but I would urge you to stay (I’ll elaborate later on).

I was initially very nervous about finding seats in a tent considering we had no reservations and weren’t with a tour group. It turned out that I needn’t have worried, you just have to be persistent and take a fair amount of rejection until you get lucky. Initially we hit the Hacker tent and grabbed a spot on a reserved table, we would have to leave at 12:30 but that still gave us 2 hours to sink a stein or two. It was here that we met Lindsey and Ian, two Scots who were also first-timers. When we were kicked out they came with us to the Paulaner tent where we miraculously found room for five people on a table with a French contingent. Finding space turned out to be a special power of mine that stood us in good stead for the rest of the trip.

The tripod of glory

That Saturday night we were inducted into the ways of Oktoberfest, namely singing, dancing and smashing your stein wildly into the stein of the person next to you. If you’re thinking of going then there is a song you should learn, it very simply goes ‘Ein Prosit, Ein Prosit, Der Gemütlichkeit’ and repeat. Gemütlichkeit is one of those German words (like schadenfreude) that has no English equivalent. It translates as a feeling of togetherness, acceptance and leaving your troubles at the door, it’s a feeling that is definitely reflected in the mood of the crowd. I had never seen such a happy and well mannered bunch of drunks in my life so I set about joining them, something I succeeded at if the photographic evidence below is anything to go by. 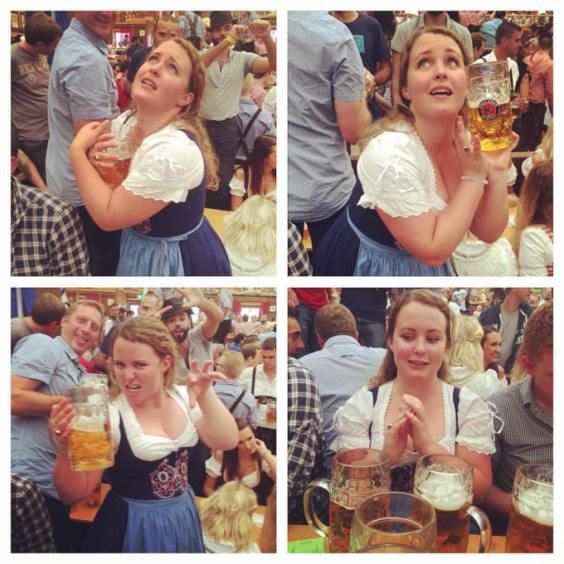 A love affair with beer

I was blown away by how smoothly and happily the tents ran. To get a stein you simply need to make eye contact with a waitress and signal how many you want. These incredible women will then carry anywhere up to 10 massive steins at a time back to the table (their skills and strength are astonishing). The average price seemed to be €10.60 a stein plus tip which is well deserved. You can also buy a huge array of food to soak up the booze, the pork knuckle and rotisserie chicken are definitely worth trying. It’s generally pretty beige, all meat and carbs with vegetables few and far between, which is exactly what you need when imbibing litre upon litre of beer.

The atmosphere is heightened by the band who occupy a rotunda in the centre of the tent and play everything from Bavarian folk songs to Tina Turner and John Denver. It’s impossible to be in a bad mood when everyone around you is standing on a bench and singing Country Roads (take me home) in 10 different languages. We finished our night by spending a silly amount of money on currywurst and squeezing three people in a two-person tuk-tuk to ferry us back to the hotel  -before finally passing out fully clothed on top of the covers. 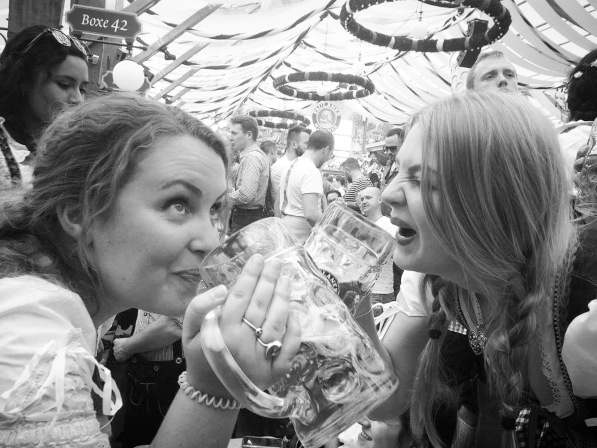 Our first night at the festival was so great I was worried that our second would never match it. Luckily we had a cooling off period on Sunday before we went back for the Monday. I would recommend a rest day to any future attendees, I truly don’t know how people were able to go on two consecutive days without getting a white flag from their liver. Our off day was spent on a walking tour of Munich tracing the rise and demise of the Nazi party. I thought I was fairly up to speed on the history having just read Ken Follet’s Winter of the World trilogy but the tour was very informative and I came away with a much deeper understanding of how they came to power and the effect on the city. 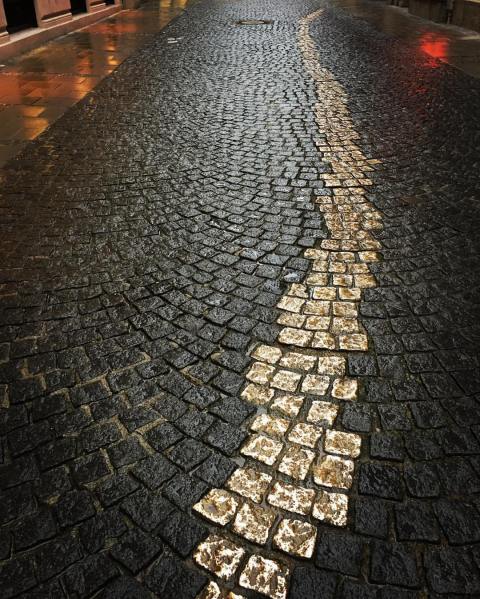 That evening we ate at an Augustiner (brand of beer) restaurant in town. It felt like we had stepped into a Bavarian person’s home that hadn’t been renovated for 50 years. There were knick-knacks and pictures covering the walls, their domination only interrupted by a swathe of lace curtains. I ordered a selection of sausages served with sauerkraut and the others had similar assortments of meat. Our condiment jars turned out to contain three different types of mustard (standard). I felt like I was living the kind of sturdy beer drinking lifestyle that was expected of me but was a little concerned for my arteries at the same time.

Alex stoked to have found his ride

Monday was our final day at the festival. We wandered down to the grounds and instead of heading straight for the tents we decided to do a bit of rollercoaster riding. It was unanimously agreed that it would be better to do this in in the morning before any beer was consumed. At €7 a pop we limited ourselves to 3 rides before it became prohibitively expensive and cold. We hit the Löwenbräu tent first which was very family oriented and quiet while people ate their lunch. We befriended a pair of German men who didn’t speak a word of English and were then joined by an older lady who was an actual rocket scientist. Later, a family with two small wriggly children also joined the party and at this point we decided to strike out for the Hacker tent and take our chances on finding a space. 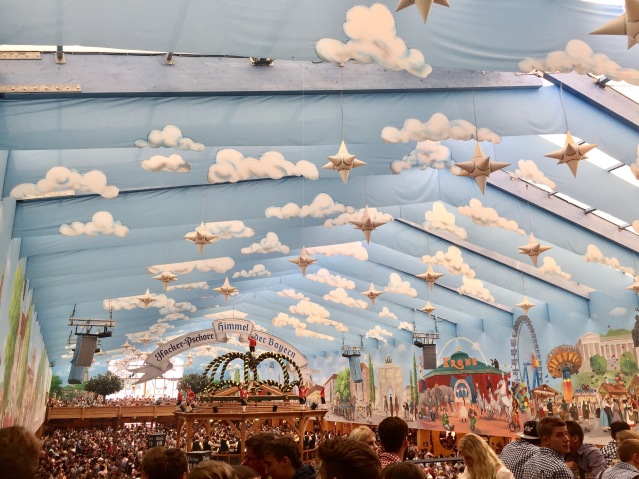 The ceiling of the Hacker tent

We ended up joining Christian and his friends for our final Oktoberfest hours. They were all Bavarian/German, as were the people next to us and behind us. It felt very different from the Saturday, it really was their festival that night and we were just lucky visitors that got to experience it with them. I was determined to stick it out to the end as I had heard great things about the final moments in the tent. I was rewarded with one of the most heartwarming moments of my life.

The ceiling of the Hofbrau Beer Hall in Munich

They distribute sparklers to every one of the several thousand people in the tent. They turn the lights off as everyone lights them and the band starts to play Sierra Madre. Everyone sings along to the lyrics which tell you not to feel sad that it’s over but to feel happy that you had the experience at all. It was such a special moment to be part of and it struck me that it would never be possible at home. You would never be allowed to have so many intoxicated people in one place let alone giving them sticks of fire to wave around in the dark. Oktoberfest is special, that feeling of togetherness somehow prevents people from acting like complete twonks and instead creates a happy crowd who all leave their troubles at the door so all that’s left is a few thousand friends all feeling the Gemütlichkeit.

Highlights: The people we met and the good natured, friendly fun we had everyday. Also staying in a hotel with a free breakfast…I would not have wanted to be in a tent like many people do on organised tours.

Lowlights: Realising that I had worn a relatively plain Dirndl and could have worn something much more elaborate (I did get vintage ones online for less than £20 so the price was right) … oh and feeling like a sack of crap the next day.

What I wish I had known before: Not to be concerned about table reservations or how much beer I was going to be able to drink. Somehow you find seats and you learn to love beer.

How much I spent:

I flew with BA so flights could have been cheaper. I booked the hotel through Expedia with a friend’s discount code and an early bird saving on top of that. I didn’t spend as much as I thought I would in the festival itself, the currywurst being my most extravagant purchase.