Reykjavik with a local – A City Break

Flying with Wow Air – Was I going to be wow’ed or is that what I would say when I realised my seat was a deck chair strapped to a bi-plane and the inflight meal would be whatever detritus flew into my mouth? Their constant emails, to tell me my flight to Reykjavik had changed yet again, didn’t fill me with confidence.

They had overbooked the flight (off to a good start then) and were asking if anyone would like to swap to an Iceland Air flight, if you get given this option then I would recommend that you take it. All in all it’s a fairly serviceable and cheap way to get to Iceland, I give it 6 out of 10 – would probably do again. My experience may be coloured by the fact that I was extraordinarily hungover having drunk many martinis the night before so take my advice with a pinch of salt.

We were off to stay with Nina, Fergus and their son Oliver for a few days and do as the Icelanders do. I’m afraid I can’t tell you the best way to get in from the airport as we were chauffeured by the obliging Ferg.

We got there for the last official day of winter so headed off on an adventure to Bláfjöll
Ski Field also known as the Blue Mountains (not like the Australian version). We went to pick up a friend of the aforementioned Fergus, along with his sled, on the most structurally unsound trailer I have ever seen. It turns out that sled really means snow-mobile and we weren’t going to be tobogganing. I was dubious that we would even make it to the mountain at all.

Alex and I were completely kitted out in borrowed ski gear and headed up the slopes for the best day of skiing I’ve ever had. Blue skies, not a breath of wind, hardly any people and excellent snow. Best of all it cost a grand total of about 12 quid for a lift pass so it was also the cheapest day skiing I’ve had. I was then taken for a whirl on the sled which was completely, utterly, buttock clenching-ly, teeth gritting-ly, terrifying.

That night we went for an amazing dinner at VON Mathus&Bar. I can’t recommend this place highly enough. I found myself eating Ox cheek, smoked trout and chicken skin, not my standard fare but they were part of a delicious set menu that changes with the seasons and what is available locally. If you’re looking for a great meal with excellent service then this place is worth a visit.

The following day we went tiki-touring around the coast which was stunning. There are companies that run tours out to certain sites but I would recommend hiring a car or a taxi driver to take you around for the day. If there are a few of you it’s pretty comparable on price and you can go wherever you want, they might even be able to show you the oldest swimming pool outside Reykjavik so you can bypass the exorbitant price of the Blue Lagoon.

Below you can see the moment just before Alex and I both got completely soaked by a rogue wave, you will notice Ferg legging it in the background. Nina is sensibly out of shot… 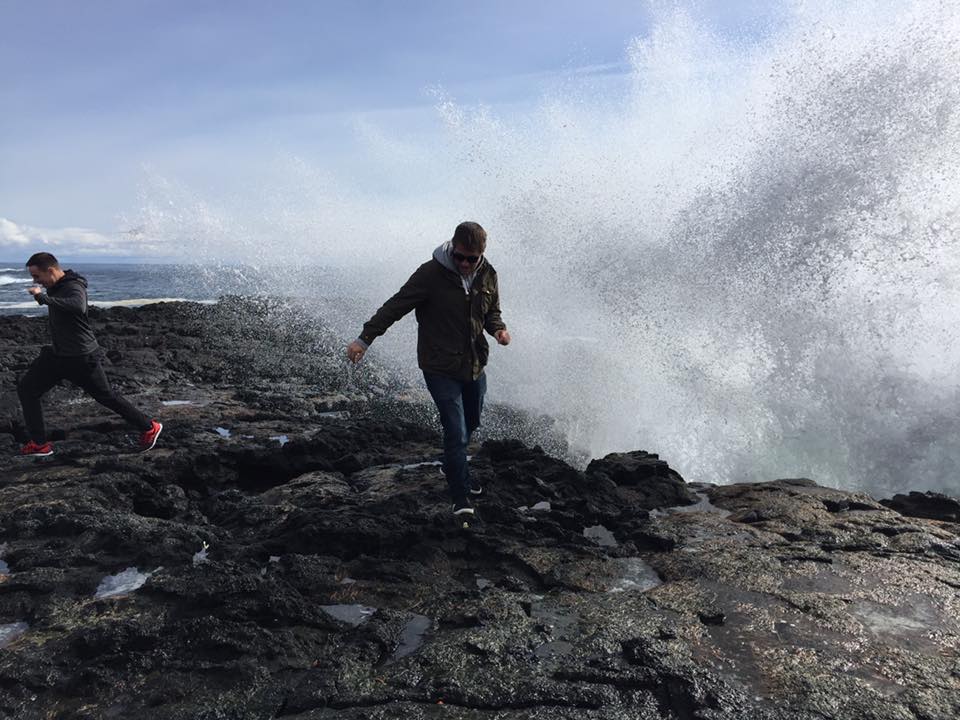 The geo-thermal activity here is quite similar to what you would see in New Zealand but the landscape seems to be more obviously volcanic, the lava fields stretch for miles. We had bought a picnic at BONUS (a supermarket – their symbol is the pig) and ate that sitting looking out to sea. 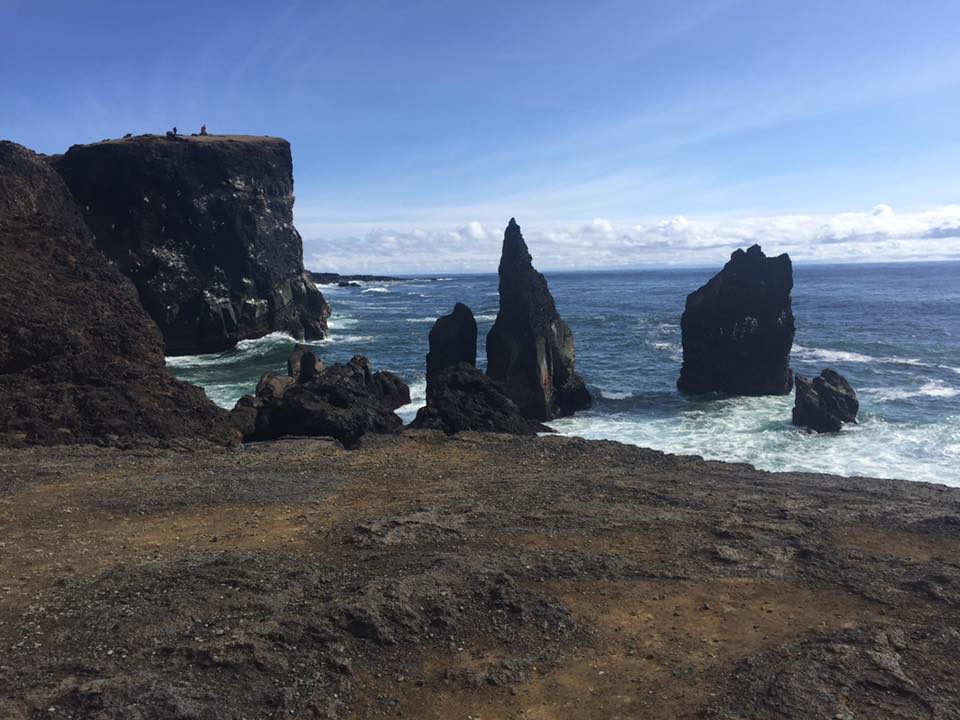 We also went to visit the spot where the North American Plate meets the Eurasian Plate but it was tipping down by that point so we didn’t last very long. You can actually scuba dive between them if you’re looking for a very cold half hour of activity. 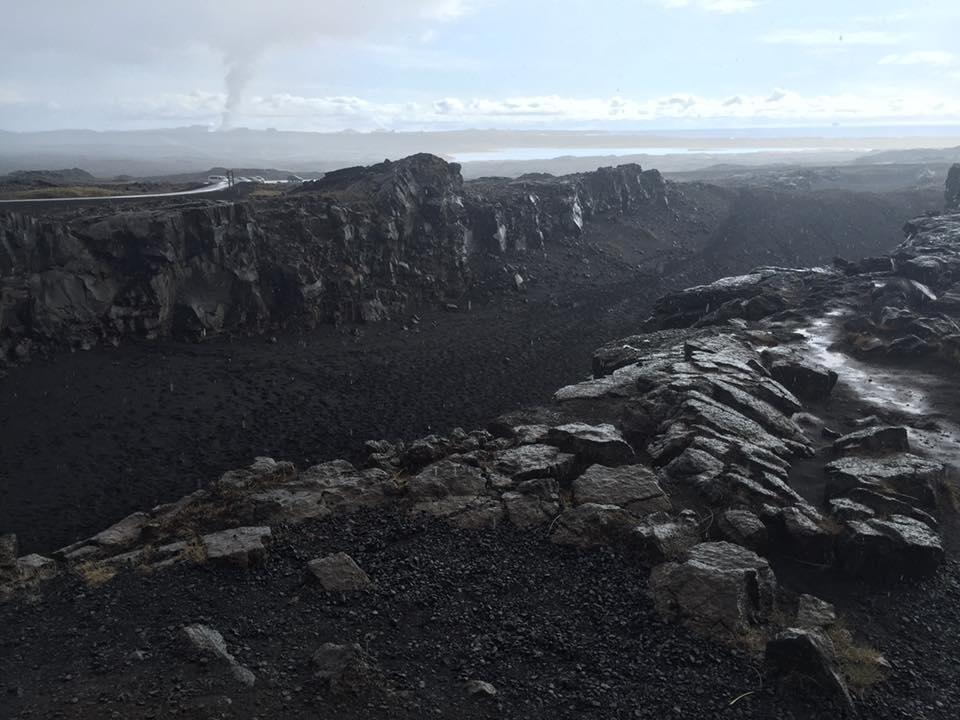 I then got to take my first trip to IKEA where I was inspired to use vertical space more and buy endless knick knacks, Alex splashed out a shoe horn and we ate meatballs…all round a great success.

The educational portion of the trip took place at The Settlement Exhibition Reykjavík 871 +/- 2 . It is an exhibition built around the excavated site of what is thought to be the oldest dwelling in Iceland. They can date it to 871 (give or take 2 years), so precisely because they know there was a volcanic eruption at that time which can be measured in the glaciers of Greenland. The whole thing was well laid out and very informative. 8 out of 10 – would recommend.

We also dropped into Harpa which is their performing arts hall to have a quick squiz, it’s a very impressive building so if you can get tickets to a show it would be a great night out.

All too soon our time was done and we were up at stupid o’clock in the morning to be dropped back at the airport. Iceland was wonderful, I think there must be something about a small population and inclement weather conditions that creates lovely, interesting people. 10 out of 10 – would go again.